What is a Landscape?

A landscape is essentially the visible features of a land area, its landforms, and the manner in which they integrate with man-made or natural features. A landscape includes the physical elements of geophysical landforms like hills, mountains, and bodies of water like sea, lakes, rivers, and ponds. It also includes living elements of land such as indigenous vegetation. The human elements include different types of land use, structures, buildings, and transitory elements like weather conditions and lighting. 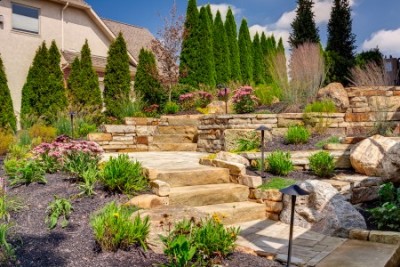 Combining the cultural overlap of human presence and their physical origins, landscapes are a reflection of a living synthesis of individuals and place that is instrumental to national and local identity.  A landscape’s character assists in defining the self-image of the inhabitants and providing a sense of home. It is basically the vibrant backdrop to the lives of individuals.

A landscape is also viewed in terms of aesthetic appeal or as a pictorial depiction of an area of countryside, especially within the category of landscape painting. In addition, when the visual appearance of an area of land is deliberately enhanced by changing vegetation and contours, it is looked at as having been landscaped.

History of the Word “Landscaping”

The word “landscape” was initially printed in English in 1603. It has origins in Middle Dutch with the word “landscap,” which means region. The word also has origins in Old Norse (landskap) and German (landschaft). Landskip is the previous formation of the word in English. It should be noted that the suffix ‘ship’ has close ties to schaft, which means constitution, shape or condition.

The emergence of the term “landscape” came around the turn of the 16th Century to represent a painting with the primary subject matter being a natural scenery. Land, which has its origin in Germany, may be viewed in the sense of a place to which individuals belong. For example, Ireland is the land of the Irish. “Scape” as a suffix corresponds with “ship,” the more commonly used English suffix. The roots of “ship” are linked etymologically to sceppan or scyppan in Old English, which means to shape. ‘Schaft’ as a suffix is associated with the verb schaffen. Therefore, “shape” and “ship” are etymologically linked as well.

The contemporary form of the word has connotations of scenery and, as was previously mentioned, it emerged late in the 16th Century. This was when the word ‘landschap’ was made known by Dutch painters who used it in reference to paintings of inland rural or natural scenery. In 1598, the word ‘landscape’ was first recorded.

The definition of landscape reflected in dictionaries conveys both a general and a particular meaning: being a part of the Earth’s surface.

Types of Landscaping Over the Years

Below are some of the common landscaping styles:

The Eastern philosophy and way of designing gardens has become increasingly popular in the Western world. Therefore, to enjoy the elegance and order of this garden style, a lot of individuals devote their backyard to it.

Similar to other designs, this style gets much of its atmosphere from the plants with which it is created. As new varieties of Mediterranean plants like palm trees adapt to different climates, the Mediterranean style is among the most popular designs used in different parts of the world.

This is a tremendously popular design that is created through the type of plants and garden décor. This style is mainly used in arid regions like New Mexico and Arizona. However, it is becoming more and more popular in different parts of the world. Again, since much of the atmosphere can be fashioned with hardscapes and décor, it is becoming more popular in areas which are typically unable to sustain the kind of arid plants used for this style.

This style was originally created to raise crops for family sustenance. Today, many individuals who use this landscape style still make provisions for herbs and vegetables to be used in the kitchen. However, these gardens have taken on a slightly new use and appearance. Initially, there was a small number of flowers, but now we are seeing more and more cottage gardens overgrown with beautiful arrays of flowers. 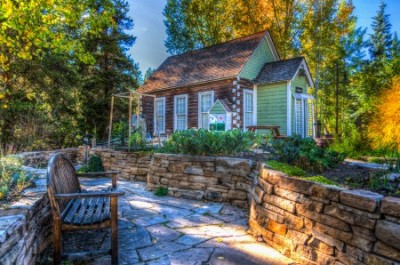 Based on the type of plants and geographic location, this type of landscaping is typically grouped in the same category as the Mediterranean style. However, the plants usually have considerably larger flowering plants and leaves with intensely vibrant colors. Thick foliage is usually placed towards the back of flower beds to create the look of a dense tropical atmosphere in the garden.

The formal landscape style is largely based on geometrical shapes and straight lines. Most of the time, this design is quite symmetrical. Plants are placed in order and pruned continually to preserve the formal effect.

It’s exciting to see how landscaping was conceived and how it has grown over time. At Hidden Creek Landscaping, we take great pride in keeping up with the trends, retaining knowledge of the tried and true landscaping styles, and perhaps most importantly, combining our creativity with customer visions to create new and exciting designs! If you are thinking of starting a landscaping project, contact us today. We can make your backyard dream a reality!